The town built on a legend

Montiano, a natural balcony overlooking hills that extend as far as the sea, is rich in flavours and ancient remains. Legend has it that the town was founded by Roman slaves who, fleeing the bondage of forced labour, gained their freedom by finding refuge and a new home here.

Because of its strategic position, Montiano has been under the rule of various noble families over the centuries, the most important being the Malatesta, and also of the Holy See, with disputes continuing until the unification of Italy.

Slow down and enjoy a leisurely holiday in Montiano. The heart of the town is the ancient Rocca Malatestiana fortress, whose outline marks the limits of the town that was once the home of Giacomo Malatesta. Continuing on there is Palazzo Pasolini, the Arco degli Spada (Spada Arch) and the church of San Francesco.

If you want to combine nature, poetry and food and wine, choose one of the itineraries along the network of poetic trails, which include a number of farms, rural guesthouses and restaurants where you can try local delicacies.

For a particular view of the city take a walk in the Park of Remembrance. The garden houses a suggestive War Memorial.

The Poetry Trails are eight circular routes that take walkers on an emotional journey through the countryside with a lyrical twist. Discover them all!

Not to miss: within the cellars of the Rocca Malatestiana, you can see a famous crib by Gualtieri, a renowned crib maker who started his now nationally famous artistic career in Montiano.

Be sure not to miss the renowned Cicciolo festival at the end of September, with food stands and traditional culinary products. 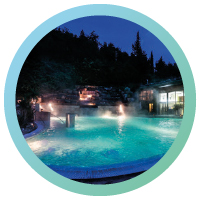 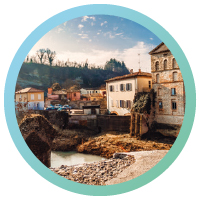 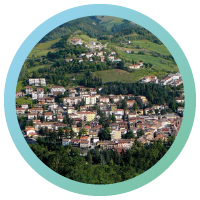 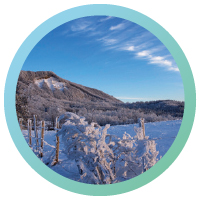